First of all,.. JimmyJo and the Jumbol'Ayuhs is pronounced Jum-bo-LAY-uh, which rhymes with, hmm... well, let's say "conveyuh" hah hah.. It's a "Maine" play on words.. If you need more explanation than that, go listen to some "Bert and I" records... Anyway we're from Maine, which, (you probably don't know this) is the second state in the United States in percentage of residents who speak French (after Louisiana of course). We are ALL Yankees from the northeast by birth: three New Englanders, one New York State, and one Ohio, but have all been in Maine for many decades.. We LOVE pretty much everything Cajun, the music and food of course, but more than anything we love the *community*, the genuineness of the music, the love the sincerity raw emotion, gutsiness, openness.. Louisiana and Maine have more than language in common,. Both are rural states where people worked hard (farming, fishing, working in the woods and on the rivers (bayous)) and played hard. Music was part of the fabric of life that counterbalanced work and while the music is pretty different, there is a connection and we, as a band, try to honor that! The original Acadians came from Nova Scotia and I am not going into that here.. you can Google "Le Grand Dérangement" (or just click). Suffice it to say that some of the Acadians ended up in Maine while many more ended up in southwest Louisiana. This all started in the mid 1700's and after 300 years, we still stay connected culturally. More about the band:

JimmyJo and the Jumbol'Ayuhs plays Cajun "dance hall" music as it has evolved into the 20th and 21st centuries. We try to stay true to the tradition and our repertoire includes tunes by Dewey Balfa, Octa Clark, Canray Fontenot, Dennis McGee, Amédé Ardoin, But we also realize we are dealing with a "continuing tradition" and play many modern Cajun songs, including some original numbers penned by Pam and Jim, and many of our friends who are a part of the present-day Cajun scene: Mike Doucet, Mark and Ann Savoy, David Greely, and MANY more, as well as some Swamp Pop and Zydeco numbers. This is DANCE MUSIC folks, and we always encourage folks to get up and dance, whether we are in a dance hall or in a concert setting. The music makes us want to dance.. don't be shy, get up and DANCE..

Recently, JimmyJo and the Jumbol'Ayuhs has played at several of the Cajun/Zydeco and "roots" festivals in the northeast (Bayou and Brooklyn, Strawberry Park, and other folk fests.. NEFFA, DEFFA, Falcon Ridge Folk Fest.). We love doing this and would love to do more. I think we bring a "slightly different look" to Cajun music with 5 part vocal harmony, innovative percussion solos, song medleys, while still preserving the "heart" of the Cajun tradition.. While the band was started in 1999, Pam, Jim and Bill have been playing together for over 25 years and it shows..

JJ&J play at the Bowdoinham public landing. Cajun food will be served!! aiyeeee!
The Bowdoinham Summer Concert Series is held every Sunday from the end of June until the end of August at Mailly Waterfront Park. The free outdoor concerts are from 6 to 8pm in the evening. This popular concert series features a wide range of rock, folk, county and acoustic music from local and regional musicians. Bring a lawn chair and enjoy a summer evening in Bowdoinham on the banks of the Cathance River.

The festival has showcased a diverse array of fine art since 2006. The show features recognized artists, as well as emerging creators; working in an array of mediums from jewelry, fiber, ceramics, photography, painting, and mixed media. The festival opens at 9 a.m. and closes at 5 p.m. Musical performances start at 10. Admission is free. 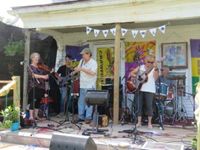